↓ Skip to Main Content
Home › News and Events › Need Storage? Why You Should Invest in a Portable Storage Rental

Need Storage? Why You Should Invest in a Portable Storage Rental 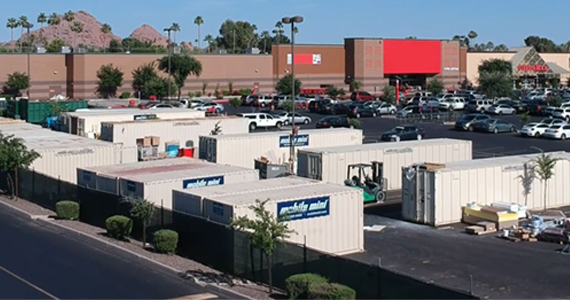 People don’t like to throw things away. Gifts and family heirlooms are precious items, valued for much more than their price tag. Other items are just useful. A futon may not be needed today, but keeping the one you own will be useful when guests come to visit during the holidays, or when your kids convert the playroom to a gaming room.

Despite the sentimental, practical or monetary value an item might hold, there are times when there just isn’t a place for it at home. It takes up space in the closet, the front porch or in the spare bedroom. It gets in your way and makes your home look cluttered and unkempt.

It’s dilemmas like these that contribute to the growing self-storage industry. IBISWorld, an industry research firm, measured the 2019 revenue for both public and mobile storage markets in the US. Combined, the industries brought in about $34 billion!

The Wall Street Journal reported that most storage businesses have seen high occupancy levels and the industry is growing, even if space isn’t. Looking globally, the self-storage market is predicted to be worth over $47 billion by 2024.

“It’s a good industry to be in,” Charles Byerly, Chief Executive of Westport Properties Inc. in Irvine, CA, said. Byerly manages more than 80 facilities in 13 states.

The Reason Behind Temporary Storage

With anywhere from 45,000 – 52,000 storage facilities nationwide, there are enough storage units throughout the U.S. for every single resident to have one. ABC reported about 11 million Americans utilize these units.

In the self-storage industry, people say that “the four Ds” drive the need for extra space: death, divorce, dislocation and downsizing, according to The Journal. Bloomberg had a slightly different version, swapping out downsizing for disaster.

Either way – changing circumstances, coupled with a desire to hang onto things, but not have or bring them with us right away, make for a lucrative storage rental industry.

“[My things] would have just taken up unnecessary space in our house,” said college sophomore, Juli Ann Polise to The Journal. The contents of her college dorm room were kept in a storage unit while she was on break. “We are definitely doing it again next summer.”

Once people see the benefits of using the space, they are unlikely to go back. They don’t want to relocate their things to a cheaper unit, and they are very likely to rent the unit out for far longer than they originally anticipated.

As in any case when precious items are left, mostly unattended, there are some risks involved in renting out a storage space. Storage unit theft isn’t uncommon and many times, thieves find looting unwatched lots far too easy.

ABC reported on two thieves working midday in Missouri to break locks, sort through other people’s items and haul it away. The entire episode was recorded on a security camera, though the criminals were confident they had time to gather and discard what they did and didn’t wanted.

This kind of thing happens all over the country. One Chicago resident, Jason Tomaric, began to warn fellow renters at the storage unit he kept his bicycle, hard drives and other possessions, of a burglar who helped themselves to Tomaric’s belongings, ABC7 Chicago reported. He believes he isn’t the only victim.

“When I peeked over the top, it looked like somebody had walked along the roof and pressed down all the chicken wire, and there were several spots where I noticed the wire was also cut and peeled up,” he told ABC7.

It’s not just faceless strangers who take advantage of these typically unguarded and under-secured units, though. The Advocate, a Louisiana newspaper, reported a Baton Rouge handyman named Ryan Lance Redinger stole $25,000 worth of tools and other goods from his employer’s unit.

Redinger had the unit’s security code and used it to enter the space 13 different times while still employed. He then pawned the items he took at local shops.

ABC News consultant and former FBI agent Brad Garrett explained that many storage unit thefts are not reported – possibly because they go unnoticed for some time.

“The locking systems are extremely poor, and the ability for people to go into them 24 hours a day sort of make them ripe for people to steal items if they have a pass to get in,” Garrett clarified.

What is possibly worse than learning that valued possessions have been lifted, is the fact it often takes so long for the renter or owner of the company to take note of the missing items. Upon further investigation, Tomaric found out the owner of the units had known of the burglaries for months before the renter found out, and Redinger was able to enter the unit 13 unique times before a complaint was filed.

Garrett urges people who are considering to rent-out storage space to first, do their own research before committing to a place.

“In other words, what type of camera systems do they have?” He advised potential renters to ask: “What are the locking systems? Can you control the type of locking system? Who has access? Do they have cameras 24 hours a day? All those questions need to be answered to your satisfaction before you store anything there. Deciding whether you want to place your goods at a temporary storage facility is really driven by you doing your own homework.”

There are alternatives to a traditional storage unit. A Mobile Mini shipping container rental offers many benefits over a storage unit facility. For one, they are on-site storage units – not in an obscure or inconvenient location that is essentially, “out of sight, out of mind.” This way, your belongings are on your property, and in your care.

Valued property is more accessible and easier to keep an eye on, while thieves target storage unit facilities elsewhere. While many ask, “how much do portable storage units cost,” it should be considered that peace of mind and the monetary/ sentimental value of your items is something worth investing in.

If you own a business, you can keep the container rental in the far corner of your parking lot or behind your building to keep out of the way of customers and employees. Meanwhile, it’ll be close enough that you won’t have to entrust various employees to access the unit with your credentials.

Finally, with Mobile Mini’s patented Tri-Cam Locking system, you know your assets are much more secure than behind an easily-severed padlock.

Posted in News and Events